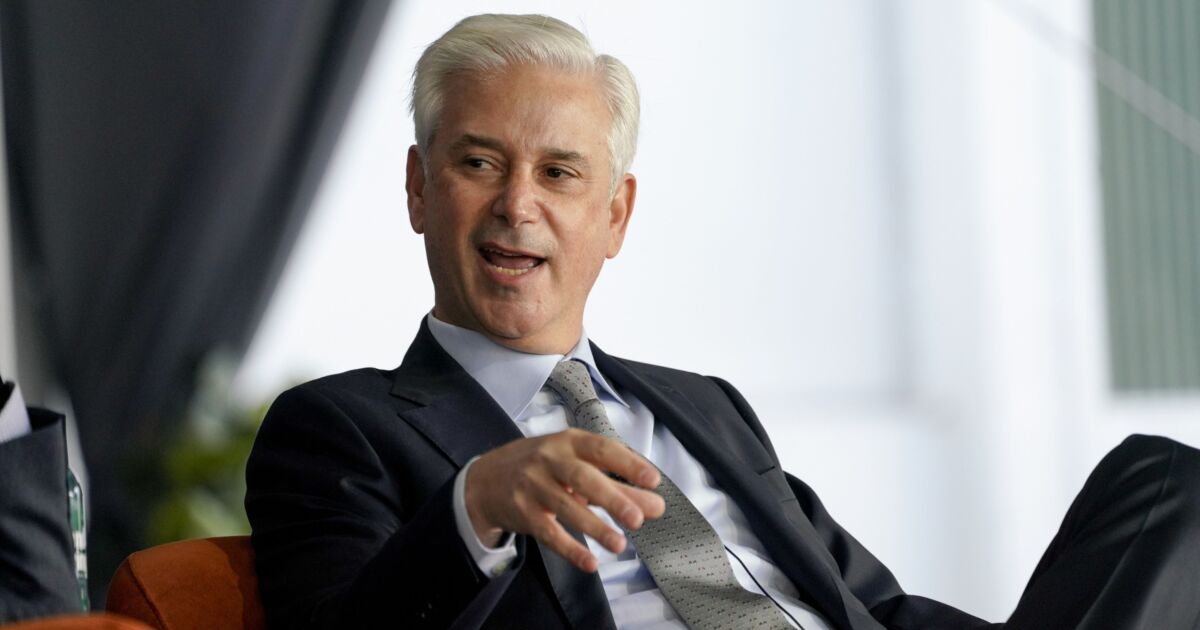 Wells Fargo executives are optimistic that loan growth will accelerate in 2022 after the bank recorded a small pickup in borrowing at the end of last year.

The $1.9 trillion-asset bank is enjoying momentum across several lending sectors, Chief Financial Officer Mike Santomassimo said Friday, and it expects loan growth in the low-to-mid single digits this year as consumers and businesses again start to tap the bank for credit.

Wells Fargo’s total loans rose to $895.4 billion at the end of the fourth quarter of 2021, up nearly 1% from the same period in 2020 but still well below prepandemic levels. The previous year, total loans at the San Francisco bank fell by 8%.

Loan growth in the fourth quarter of 2021 would have been stronger if not for home lending, where balances fell by nearly 16% from the year-ago period, as the pandemic-driven boom in refinancing and purchase activity slowed. Auto loans continued their gains, rising by 17% from the fourth quarter of last year, and Wells posted a 5% increase in credit card balances.

CEO Charlie Scharf said that card spending “remains strong,” but the bank is monitoring the impact of the omicron variant and saw some softening in spending on restaurants, travel and entertainment in recent weeks.

Wells Fargo’s forecast lines up with broader expectations of a snapback in bank lending this year, with growth driven by both consumers and businesses.

“There were some green shoots in Q3. We’re seeing a pick-up in Q4, and we would expect that momentum to continue into 2022,” said Kyle Sanders, senior equity analyst at Edward Jones.

On the bank’s earnings call, Autonomous Research research analyst John McDonald pointed to improving loan prospects in the banking industry and asked whether Wells is “invited to that party” given an asset cap the Federal Reserve imposed on it in 2018.

Santomassimo responded that the Fed’s $1.95 trillion asset cap is not constraining the bank’s loan growth prospects, adding that it has “plenty of room to continue to grow with our clients.” The bigger constraint has been on the deposit side of the balance sheet, he said, noting that the bank has been taking steps to ensure it can absorb new retail deposits.

Wells’ net income jumped to $5.75 billion in the fourth quarter, or $1.38 per common share, up from a profit one year earlier of $3.1 billion, or 66 cents per share. The bank’s stock price was up 3.5% to $58.06 in afternoon trading — a contrast with JPMorgan Chase, where shares fell following guidance that expenses will be higher this year.

Sanders attributed Wells Fargo’s stock-price gains Friday to the firm’s management executing on their cost-cutting initiatives, as well as growing investor confidence that Scharf’s leadership may finally lead to the bank’s exit from the regulatory penalty box.

“It’s a huge shift in how investors are perceiving this company,” Sanders said.

Wells’ noninterest expenses fell to $13.2 billion in the fourth quarter, down 11% from $14.8 billion a year earlier. The bank raised its cost-cutting target to $10 billion, up from a prior goal of $8 billion, and indicated plans to deliver most of its identified savings within two years.

Wells Fargo executives expressed optimism about the bank’s commercial lending prospects, with Scharf saying that businesses are restocking their inventories following supply-chain disruptions, and some companies are coming out of the “defensive posture” they had taken.

The commercial banking division at Wells recorded total loans of $190.3 billion in the quarter, up by about $1.4 billion from a year earlier. The corporate and investment bank saw a larger increase, with loans jumping by about $40 billion to $284.4 billion.

“Corporate America has demonstrated the ability to adapt to the ever-changing pandemic conditions,” Scharf said.