While Rhode Island’s economy continued its expansion (restoration) in April, it is clear that some areas of our state’s economy have begun to slow. Part of this is statistical — the “comps” from a year ago have now become more difficult.

However, Rhode Island’s links to the national economy are also critical to its overall economic performance, and to some extent what we are beginning to see is national weakness already impacting us, which is quite likely the FI from FILO potentially taking hold. Whereas last month I noted that nine of twelve improving indicators displayed healthy growth rates, the story for April is a bit different: Several of the indicators that failed to improve had very large declines, most notably US Consumer Sentiment and Single-Unit Permits, and their weakness is becoming more persistent. Permits, which reflect new home construction have now declined for four consecutive months. Should this persist, it might begin to adversely affect what has been the “star” CCI performer, Retail Sales. A bit more worrisome, but actually typical for Rhode Island, is that annual changes in our state’s Labor Force, with the exception of a couple of months, have become flat. But, of course, that has always been Rhode Island’s “secret sauce” for low Unemployment Rates.

For those naïve enough to believe our state’s jobless rate is an accurate reflection of the performance of our economy, that rate fell all the way to 3.2 percent in April. For those less naïve, when Labor Force participation is taken into account, the more accurate Unemployment Rate, the participation adjusted rate was 5.5 percent for April, which fell from 5.8 percent in March.

Like the US, layoffs here have fallen dramatically, not just from the pandemic highs but from the more typical values of the past few months, as firms experiencing difficulty hiring or finding replacements have laid off fewer persons than would be justified by economic conditions. New Claims fell 88.5 percent versus last April (“labor hoarding”). 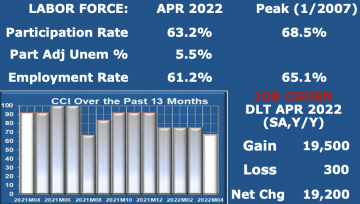 For April, only two of the five leading indicators contained in the CCI improved, and both exceeded difficult comps. Total Manufacturing Hours, a proxy for manufacturing output, rose by a healthy 5 percent, as both weekly hours and employment rose once again. New Claims, as discussed above, also improved dramatically.  A glimmer of future hope was shown by the Monthly CCI, which attained its highest value in quite a while, 92, as eleven of the twelve indicators improved relative to March. Should such monthly strength persist, Rhode Island could see less of a downside to its economic activity in the coming months, although it is far too early to tell. The question remains as to whether Rhode Island will resume its FILO status as the national economy weakens. If so, Rhode Island’s economy could begin to slow meaningfully by mid to late 2023.

Retail Sales, which has been the star performer in the CCI, increased by 10.8 percent in April, returning to a double-digit rise after two sub-par months. Weakness in housing and consumer confidence, along with a slowing national economy, may well cause this indicator to falter as we move further into 2022.

Of the leading indicators contained in the CCI, my greatest concern continues to be Employment Service Jobs, a leading employment indicator that includes temps, which registered a fourth consecutive decline in April (-5.2%). Along with all of the inflation problems we are experiencing, US Consumer Sentiment will very likely to continue its decline throughout most, if not all, of 2022.

To end on a bright note, Private Service-Producing Employment, which reflects non-government, non-manufacturing employment, has managed to sustain strong growth, even as we move past the artificially low employment levels of the pandemic.