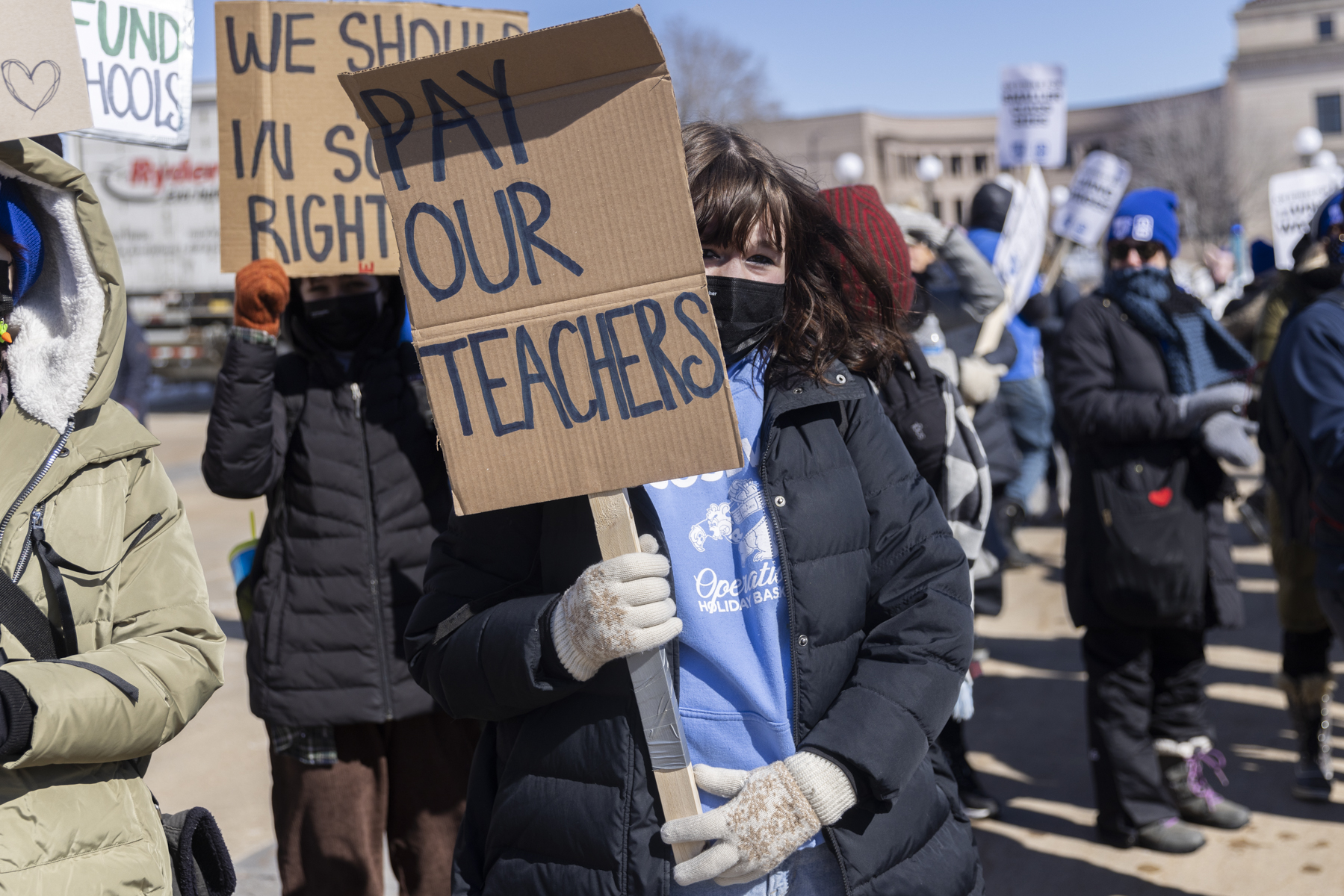 Minneapolis teachers receive  starting salaries that are comparable to those of their teaching peers in St. Paul and Anoka–Hennepin. But they earn less over time, said Patricia Saenz-Armstrong, a senior economist with the National Council on Teacher Quality.

The Washington, D.C.–based research and policy group analyzes and compares teacher salary schedules across 147 of the nation’s largest school districts, including three in Minnesota. (These salaries are specific to licensed teachers, not educational support professionals.)

“What I have observed is that Minneapolis salaries grow at a lower rate,” Saenz-Armstrong said.

A Minneapolis teacher with just a bachelor’s degree, for example, will never cross the $75,000 salary threshold. With a master’s degree, that teacher will earn $75,000 in his or her 20th year.

In St. Paul or Anoka–Hennepin, the two largest districts in the state, it would take the same teacher eight or 12 years to earn a $75,000 salary.

“That tells you that on the same lane, teachers are advancing steps to higher salaries sooner in the neighboring districts than in Minneapolis,” she said.

An open gym, Legos, a church drop-in center, and a sit-in at district headquarters: how North High students are staying busy during the Minneapolis educator strike

Teachers in Minneapolis’ adult English literacy and GED program earn less than their K–12 counterparts. They say the low pay is causing an “exodus” of teachers and reducing available classes.

Kim Ellison, the Minneapolis school board chair, shares her approach to union negotiations

Minneapolis educators hit the picket line for the second day. “Stability on the Northside is a question of racial justice,” one striking teacher said.

Striking Minneapolis educators rallied at the Capitol, called for education funding, and sang “Purple Rain.” Some non-unionized educators, and their students, joined them.

Classroom duties are piling up. Mental health needs are skyrocketing. But pay hasn’t budged. Why Minneapolis and St. Paul educational assistants are ready to strike.

Minneapolis and St. Paul educators plan to strike March 8 if no agreements are reached before then. What you need to know.

Salary increases have emerged as a key demand in labor negotiations between the Minneapolis educators union and the school district. Teachers initially called for a 20 percent salary hike, though their demand currently stands at 12 percent. They’ve stressed that they are willing to be flexible, but want “competitive pay” with surrounding districts. (Educators have said they will not budge on a demand for a minimum $35,000 for educational support professionals. These support staff are not included in this data analysis.)

In her research, Saenz-Armstrong has also noticed that over the past three years, Minneapolis teachers’ salaries have increased less than corresponding wages in St. Paul and Anoka–Hennepin. (St. Paul teachers settled their last two-year contract after a three-day strike in 2020.)

Between the step increase—which allows teachers to advance to a higher pay grade each year—and the cost of living increase, Minneapolis teachers have received a 6.8 percent pay raise over three years. During that same time window, the cost of living in the Twin Cities area has increased by 6.5 percent—“so, barely keeping up with inflation,” Saenz-Armstrong explained. (Those figures don’t include the past year and the recent rapid rise in inflation.)

In that same three-year time period, St. Paul and Anoka–Hennepin teachers received a 10 to 11 percent pay increase—keeping their salary increase 4 or 5 percent above inflation.

That’s a lot of math, but the bottom line: Minneapolis teachers effectively received no raise at all over the past three years, while St. Paul and Anoka–Hennepin teachers did.