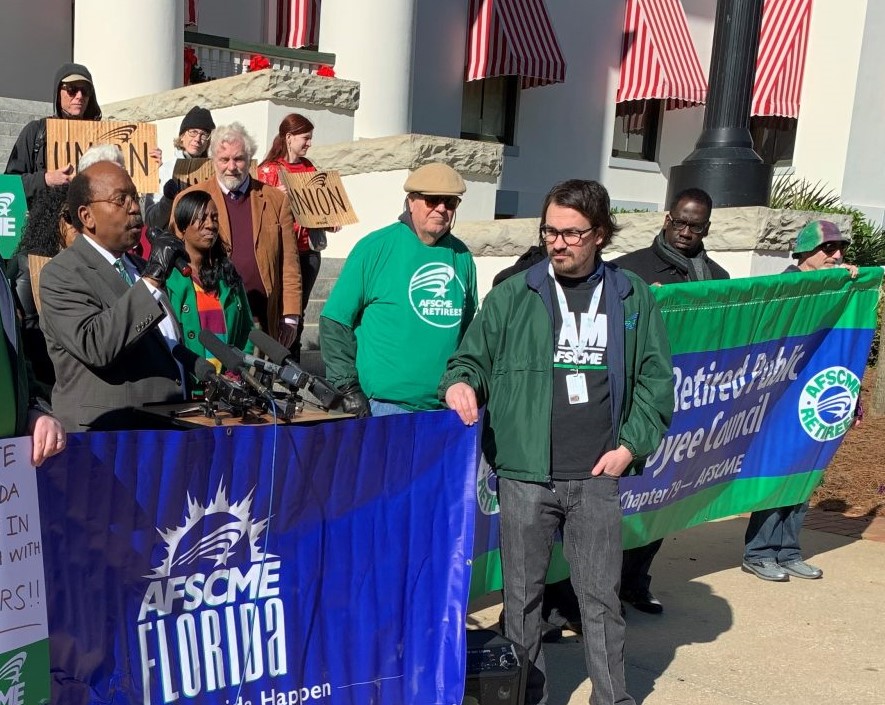 As lawmakers craft the 2022-23 state budget, the House and Senate are pushing to boost pay for state employees, local school staffers and certain health care workers.

But the two chambers are far apart in getting the job done, and it’s not certain which avenue is better when it comes to doling out the pay raises.

As it stands now, the Florida House and Speaker Chris Sprowls wants to see a pay increase of 5.38 percent for the state workforce as inflation rises in Florida and elsewhere, according to budget documents. Meanwhile, the Florida Senate is pushing a minimum wage increase of $15 an hour for state workers and a broader pool of employees, an initiative led by Senate President Wilton Simpson.

With about three weeks to go before the end of legislative session, the chambers will have to negotiate a pay plan that would cost hundreds of millions of dollars.

“Because the chambers have different approaches [to salary increases for state workers], this is one of the issues that would be worked out in the budget conference,” Katherine Betta, Senate spokeswoman, said in an email to the Florida Phoenix.

Keep in mind that Florida’s minimum wage is required by law to gradually increase to $15 an hour by 2026, part of a ballot initiative that Floridians approved in 2020.

But Simpson is pushing for that figure well before 2026 for government employees.

And there are distinct differences in the plans.

But under the proposed House plan using the 5.38 percent figure, the governor would earn $141,400.

No matter what, significant pay raises will be in the picture.

The Senate’s budget proposal includes an overall boost in the minimum wage for state employees to $15, plus a pool of other workers.

Kristen Knapp, a communications staffer with the Florida Health Care Association, representing Florida’s nursing homes and long-term care, told the Phoenix that the proposal would help with staffing shortages.

“We’ve had tremendous challenges with COVID in terms of our increased costs,” Knapp said. “We’ve got our staff experiencing burn out from just being in this pandemic for over two years. You know, we’ve got vacancies we need to fill, and the Senate’s proposal… gives us the ability to be competitive employers, to get our staff to a competitive wage.”

Meanwhile, advocates for higher wages praised efforts by the Senate to boost the minimum wage for state employees.

Average pay for state workers has been low compared to many others states, “which leaves many people struggling to pay their bills each month,” Josh Weierbach, executive director of Florida Watch, said in an email to the Phoenix.

“It is long past time we gave these essential workers a raise and we hope that all legislators can come together and do what is right for the thousands of Floridians who provide vital services to our citizens each day.”

The House plan is about inflation

State Rep. Jay Trumbull, chair of the House Appropriations Committee, told reporters at the Capitol last week that “this 5.38 percent is across the board for all state employees,” adding that Florida still cannot “compete” with private sector jobs. He also made remarks about inflation, while blaming the Biden administration for the rising costs for goods and services.

“We’ve got rising inflation, the most we’ve seen in 40 years and it’s hurting people,” said Trumbull, a Republican representing part of Bay County in the Panhandle.

“From a small business owner like me, it costs me more every single day to run my business. And it’s not because of decisions I’ve made, it’s because of decisions that have been given to me from what is happening with the amount of cash that’s been infused in this economy.”

State Rep. Allison Tant, a Democrat, told the Phoenix in a phone interview that she’s not in favor of her chamber’s proposal concerning state workers but agrees with the Senate’s approach to increase the minimum wage for state workers and other school personnel to $15 an hour.

“I would like to see us adopt the Senate position. I am very much in favor for the Senate’s position,” said Tant, a Democrat representing part of Leon County, in the state capital.

“Our budget reflects the state’s priorities, so we are gratified that leaders in the House, Senate and the Governor agree that Florida’s public sector workers need significant pay increases. The implementation will be key, because we need an increased starting wage, preferably beyond what has been mandated.”

“AFSCME Florida will continue to advocate for fair across-the-board increases for the front-line workers who kept Florida open throughout the COVID-19 pandemic.”

According to the Department of Management Services’ Annual Workforce Report, Florida’s state employee workforce has grown over the years. In 2020, there were 166,509 positions. The largest group in government is the State Personnel System, which covers nearly 100,000 positions.

As for school employees, the Senate proposal calls for raises to apply to support staff in local school districts, by Oct. 1, 2022.

By that date, each district superintendent must “submit an attestation to the Department of Education subject to the penalty of perjury…which includes a statement that every school district employee’s hourly rate is at least $15.00 per hour.”

However, it’s unclear if this provision would be in conflict with the Florida Constitution, which says  local school boards “shall operate, control and supervise all free public schools within the school district.”

That authority has been the centerpiece of recent legal challenges between local boards and the state’s executive branch.

Florida Education Association President Andrew Spar told the Phoenix that “it’s okay to set some boundaries and expectations. And that’s really what the Senate is doing here.

It’s not clear what would happen if a school board declines to provide their employees $15 an hour.

Spar says that districts still have to negotiate with unions and “we support moving to $15 dollars an hour, especially when the funding is going to be provided.”

The Florida Department of Education reports the average salary of support staff, but does not report the hourly wage of each position, so it’s not clear how many workers would be impacted by the $15 plan.

In Miami-Dade County in South Florida, bus drivers already get $15.46 an hour, according to Rachel Rodriguez, with the district’s transportation department. Miami-Dade bus drivers are guaranteed seven hours of work. But like many other school districts dealing with bus driver shortages, drivers are picking up extra shifts.

But in Osceola, another Central Florida school district, bus drivers start at $12.45 an hour, according to Randy Wheeler, with the transportation department for the district.

Lare Allen, president of the Osceola County Education Association, told the Phoenix that pay hikes  would help recruit and retain bus drivers, cafeteria workers, paraprofessionals, technical support staff and other positions needed in schools that are not classroom teachers.

“It’s sort of like building a football team but you decide to leave out two or three players,” Allen said. “It’s not going to work.”

Lawmakers want salary hikes for state workers but there’s a conundrum: $15 an hour or 5.38 percent?