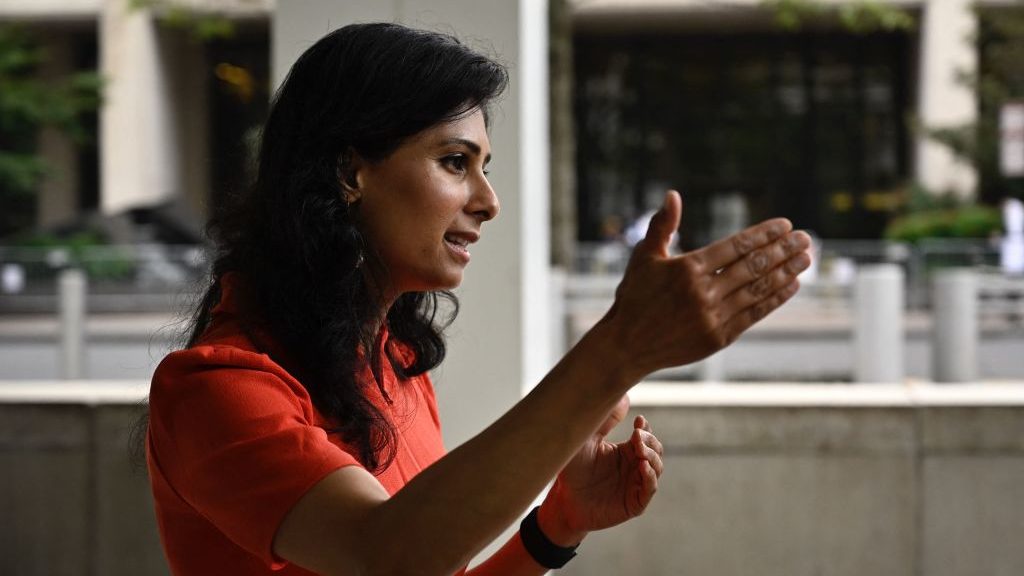 Omicron and inflation have put the brakes on the global economy, the International Monetary Fund reported in its latest World Economic Outlook report, released Tuesday.

The IMF’s biannual report looks at economic trends around the world to estimate global growth in real gross domestic product. For 2022, the IMF put GDP growth at 4.4%, down .5% from the last forecast in October. “Marketplace” host Kai Ryssdal spoke with Gita Gopinath, first deputy managing director and former chief economist at the IMF, about the challenges facing the global economy. The following is an edited transcript of their conversation.

Kai Ryssdal: So I’m just going to read you the first line of the first page of this report, and then we’re going to talk about it: “The global economy,” the World Economic Outlook from the International Monetary Fund says, “enters 2022 in a weaker position than previously expected.” That is not good news.

Gita Gopinath: Well, we certainly have a downgrade, and it’s been driven by quite significant downgrades for two of the largest economies, which is the U.S. and for China.

Ryssdal: The obvious answer is that it’s omicron, but what else were you thinking about as you made this forecast?

Gopinath: So, I actually think the obvious answer is not the correct answer.

Ryssdal: That’s why you’re the economist in the conversation.

Gopinath: We expect omicron will have a negative impact in the first quarter of this year, but then we expect that effect to come off. So for the year as a whole, it’s only explaining about -0.1 percentage point of a downgrade. The downgrade really comes from the U.S., which is for three reasons. One, we no longer have the Build Back Better fiscal package in our baseline. Monetary tightening is going to start. And supply disruptions, especially in the labor market, are lasting longer than we expected.

Gopinath: Now, my view is that the U.S. recovery has been very strong. It’s basically back to where it would have been in the absence of the pandemic, based on previous projections. On the other hand, inflation is very high, so it’s clear that the U.S. Fed should raise interest rates. I can’t project whether they will do it this time around or in the future, but they certainly would see some monetary tightening, which then would slow growth down some, which is part of the solution to bringing down inflation.

Ryssdal: One more thing about the States and then I’ll turn to the global economy: Are you “team transitory?” Or is inflation going to be with us for a while?

Gopinath: I think everybody’s terribly confused about what the word “transitory” means, you know. I can tell you what our projected path looks like. Our projected path is for inflation in the U.S. to peak in the first quarter of this year and then to decline. So it comes down to 3.4%, but that’s still above the 2% target of the Fed. So it’s going to take a while to get back to 2%. That’s more in our projections for 2023.

Ryssdal: So spitball this for me, and I know that’s against your inclination as an economist, but 2022 is going to be what 2022 is going to be, and you lay that out here. What about the out years, 2023, 2024? Is there a sense of normalcy anywhere, even in your internal Gita Gopinath projections?

Gopinath: Well, I mean, we should first recognize that after a historic contraction in 2020, the global economy did rebound quite strongly in 2021. The problem is that countries have recovered at very divergent paces. But our expectation is that by the end of this year, we will truly exit the acute phase of the pandemic — at least in terms of the economic impact really out of this pandemic. But again, there’s been surprises galore these past years.

Ryssdal: There have. Quickly about you: You’ve had a couple-year run here at the IMF as the chief economist. You’re not going back to Harvard to the life of an academic. You’re staying at the IMF. You’ve gotten kicked upstairs, you’re going to be the first deputy managing director at the International Monetary Fund. Why?

Gopinath: Well, in my three years that I’ve been doing this job — and especially the past two years — I got to see the difference one can make by bringing together rigorous economic analysis and public policy, to be in that intersection. So I figured that, given where the world is, that I should continue for some more time in public service.