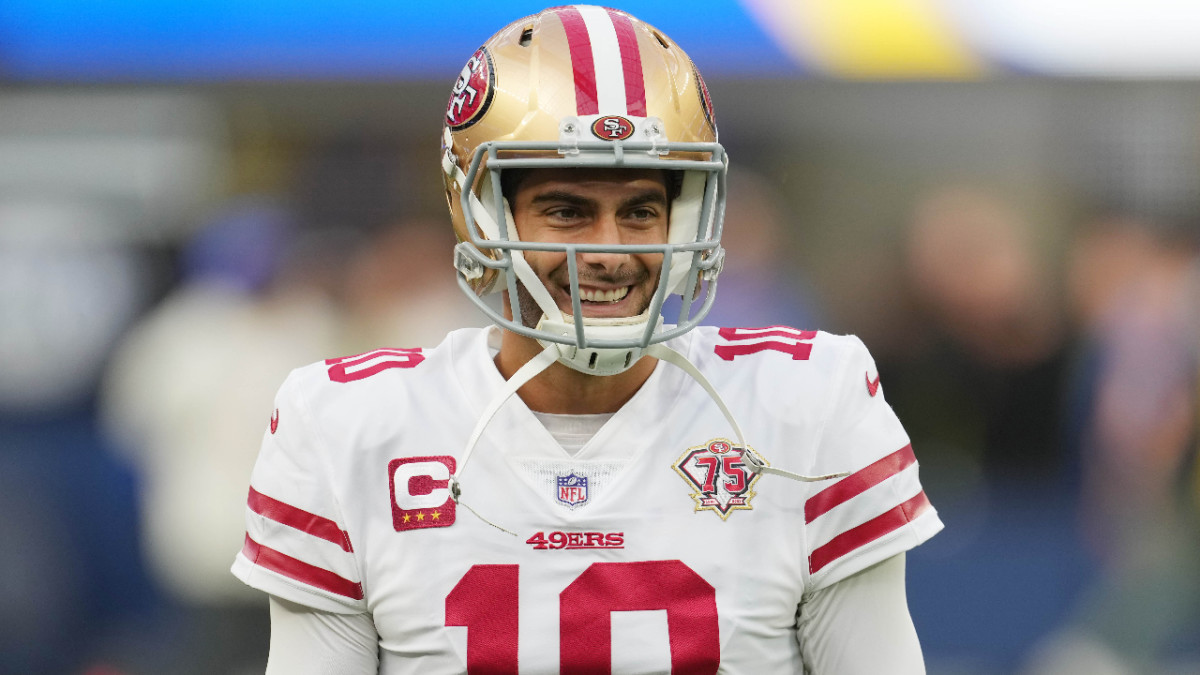 While Deebo Samuel and Nick Bosa’s contract extensions are upcoming, the 49ers have much bigger problems for the present with the new league year starting March 16 and the team currently $4.4 million over the cap (per OverTheCap).

The 49ers also have 28 impending free agents, with 21 of those players being unrestricted free agents who are free to negotiate and sign with any other team. They have only 36 players on their 2022 salary cap.

Quality players such as Laken Tomlinson, D.J. Jones, K’Wuan Williams, Jaquiski Tartt, Arden Key and Raheem Mostert could all leave the team. This offseason, they will have the opportunity to extend both Samuel and Bosa who could count as even more money against the cap in 2022.

It’s imperative to get the team under the cap before March 16 and create as much space as possible to bring back the players they want and attempt to upgrade in free agency.

This has been the talk of the offseason for San Francisco, and for good reason. Currently Garoppolo makes up 12.9% of the 49ers cap for 2022. Trey Lance only carries a 3.7% cap hit on his rookie deal and is the 23rd highest paid QB (all per OverTheCap).

The team has been accumulating high-end talent through the draft, trade, and free agency that in order to keep the team in tact they would have to spend less cap elsewhere and Garoppolo is the cap casualty.

The best bet to maximize his trade value is to wait and let QB hungry teams strike out and settle for Garoppolo. The question the front office has to be asking themselves is are they willing to wait that long or should they potentially settle now to get a later pick or even cut him if need be.

Right now his value might not be as high as some perceived heading into the off-season. Tim Kawakami who suggested they might get 2 4th round picks is standing firm on his value.

By restructuring his deal this offseason, the team can lower his cap number by $9.8 million each of the following seasons and if they can’t move Garoppolo by the start of the new league year they will need the money.

Even if Garoppolo is moved, the team will still want to maximize the money they can spend in free agency and Armstead could be a key piece in clearing that money.

Ward is the longest tenured 49ers player and is the most underrated part of the teams elite defense.

He has one year left on his contract for $12.9 million with three years of voided money beyond that. In 2023 he is on the hook for at least $6.3 million of the cap even if he leaves via free agency.

So if they extend him and give him more money now, they can save money now and not have to take on the dead money they owe him in the future.

Ward is now 31 years old so they won’t be giving him anything long term, but I predict they agree to a one or two year offer with an average annual per year salary of around $9.5 million (his current APY).

This would not help the team’s immediate cap space but the divorce of the 49ers and Dee Ford seems eminent. Last off-season it was rumored he might retire because of his extensive injury history.

Instead, the two sides agreed to an extension with the intention of saving the most money the team could, last offseason this move cleared $11 million.

If they cut him after June 1, the team can save $2.4 million now and they don’t have any financial incentive in the future as a cut in 2023 would not affect their cap savings.

With all of those moves the team could create as much as $39.6 million in salary cap space.