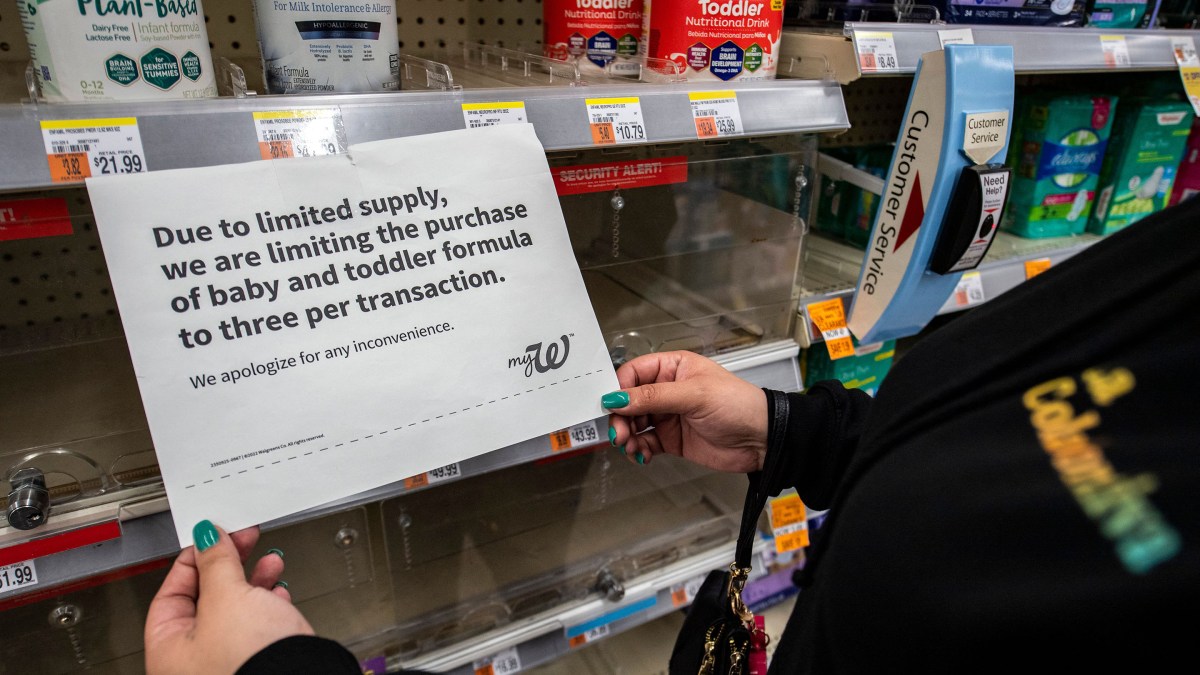 A major formula manufacturing plant, just north of the Michigan–Indiana border, reopened over the weekend after being closed down for months because of contamination concerns. That will help ease the nationwide shortage. But Abbott Nutrition says it could take up to three weeks to get more product on store shelves. Almost 75% of all baby formula is now out of stock across the country, according to analytics firm Datasembly.

So far, efforts to alleviate the shortage don’t seem to be making a noticeable difference, not for Dr. Molly Markowitz’s patients.

She works at the Fair Haven Community Health Center in Connecticut, where most of her patients are low income and many are Black or Latinx.

While all parents who use formula for their babies are feeling the shortage, Markowitz said “the families that are struggling the most are families who experience economic hardship.”

Right now the only way to find formula in a lot of places is to drive around to check multiple stores and scour the internet.

But Markowitz said not everyone can do those things: “You know, they can’t afford the gas, they might not have a car.”

“This is particularly true of those that are in rural America,” said Clifton Kenon Jr., a nurse and lactation consultant in rural Pennsylvania. “There’s significant disproportionality that affects rural Americans and communities of color, and we’ve got to start with the disparities that we see in breastfeeding.”

Black and Native American parents are less likely to breastfeed when their babies are first born than white, Asian or Hispanic parents, according to the Centers for Disease Control and Prevention. They’re also less likely to continue breastfeeding after six months or a year.

“So when we think about who is most seriously affected about this, we have to think about the inequities that we’ve already seen COVID reveal in terms of food insecurity,” said Geraldine Henchy at the nonprofit Food Research & Action Center. She says many of those same racial and socioeconomic inequities are compounding again.

And there are additional challenges now for low-income families that use Women, Infants, and Children (WIC) benefits to buy formula.

“Over half the formula that is bought in this country is bought through WIC,” Henchy said.

Parents with WIC are usually limited in what brands of formula they can buy. Early on in the shortage, that meant when those brands were gone, they didn’t have any options. Most states have loosened those restrictions, but parents still can’t use WIC to buy formula online.

“And when you’ve seen the stories about how parents are trying to find formula, buying it online is one of the key ways that they have actually done it, and so that’s a serious problem,” Henchy said.

As long as there’s still a shortage, taking away that barrier would make a big difference, Henchy said.

There’s a lot happening in the world.  Through it all, Marketplace is here for you.

You rely on Marketplace to break down the world’s events and tell you how it affects you in a fact-based, approachable way. We rely on your financial support to keep making that possible.

Your donation today powers the independent journalism that you rely on. For just $5/month, you can help sustain Marketplace so we can keep reporting on the things that matter to you.